On a chilly March evening, a small audience assembles in Princesshay. All eyes are on a large, open-sided, circular set. Lengths of electrical cable run between tall shards of lighting truss which support spotlights aimed at the circle’s centre.

The set resembles a sort of pop-concert panopticon. Red velvet rope loops laid out on the ground inscribe seven smaller circles in a flowing, flower shape. At the centre sit several more spotlights, shining outwards. Ushers encourage passersby and stragglers to come closer: the show is about to begin.

Seven performers enter, dressed in identical metallic jackets with bulky VR visors covering their eyes. They take their places, each standing in a red velvet loop. A plaintive piano, string and squeezebox recording starts to play and artificial smoke drifts across the set.

Responding to the private world in their headsets, unseen to us, the players begin to move, sometimes in sync with each other, sometimes not. They turn uncertainly on their axes as if dangled by invisible puppeteers, reaching toward objects we cannot see, apparently entranced. They do not roam beyond their rope loop enclosures.

As the piece plays on, I become increasingly baffled by the decision to conceal what captivates the dancers. I wonder if they are able to see us, or one another? Part of the pleasure of watching dance can come from seeing expressive and skilful physical movement: no such pleasure is to be found here in the repetitive, disjointed gestures of these performers.

This might seem an unfair complaint as the participants in this production are not professional dancers (they are later revealed to be volunteers). However, none of the joy that can arise from simply witnessing spontaneous physical self-expression is available here either.

Described as a “social VR experience”, From The Light of The Fire, Our Dancing Shadows was first commissioned by Bristol Watershed’s Pervasive Media Studio for last year’s Layered Realities Weekend, an exploration of the impact of 5G “next generation wireless connectivity” on culture, society and economy.

Kaleider claims this production explores “two sides of the same experience, one in VR and the other watching on”, but is communion actually achieved here, or even possible? Kaleider says use of VR technology “enables people to collaborate in the same virtual world at once, untethered”, but there’s little affinity on offer here.

Who is collaborating with whom? The sentimental soundtrack suggests a desire to elicit feeling. Yet, essentially isolated from the dancers, we watch people watching VR. What, exactly, is poignant about that?

This production alludes to Plato’s cave allegory, apparently seeking to evoke shadows, cast from a fire, flickering on a cave wall: the silhouetted approximation of reality perceived by Plato’s prisoners. Here the world the dancers see is determined by another, in common with Plato’s inmates. They are also confined, in circular prisons (not untethered, as claimed).

Writer and director Seth Honnor has said “manipulating audiences to some degree is what all shows and art do”. Plato’s prisoners were trapped in illusion, deprived of access to reality, but the showy theatrical effects employed here seem to celebrate the performers’ captivity and obscure the absence of any insight, potential or realised. Similarly, while Plato’s prisoners escape, discovering their mistaken prior belief in the evidence of their senses, no such release is to be found here.

The performance I saw ran without a hitch, for which the technical team (Andy Wood and All Seeing Eye) deserve due props. But their production skill did not compensate for a failure to engender empathy between performers and audience.

Watching people watching VR might seem on trend to technology promoters with a DCMS budget to spend, but it needs to be accompanied by more than mawkish music and school disco smoke machines to convey much meaning.

I was left wondering whether the source of its funding had compelled the production’s focus on technology regardless of artistic merit. Perhaps my memory of Plato is just a personal projection and these dancing shadows were no more than an element of the performance, dim outlines formed by bodies moving between light and smoke.

Either way this production does not reveal whether the 5G future should be revered or reviled.

From The Light Of The Fire, Our Dancing Shadows was performed in Exeter’s Princesshay shopping centre on 15 March 2019 as part of Kaleider’s Mikrofest. 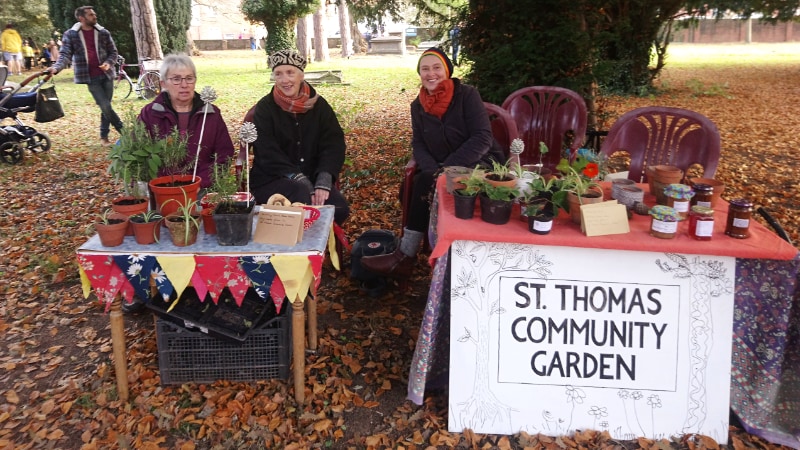 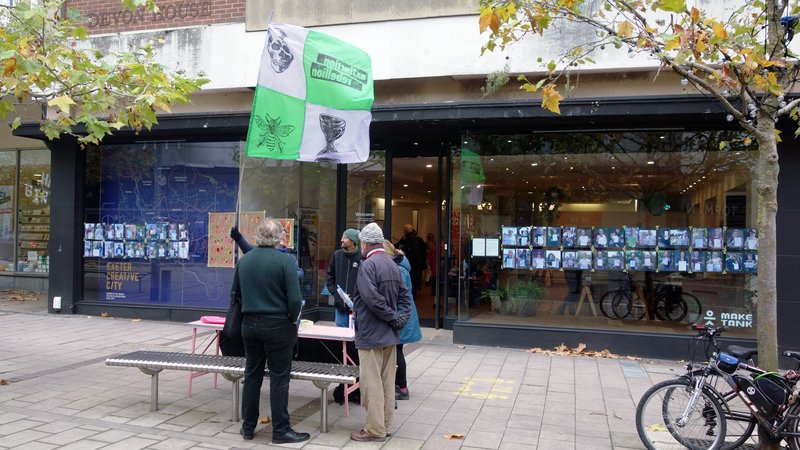 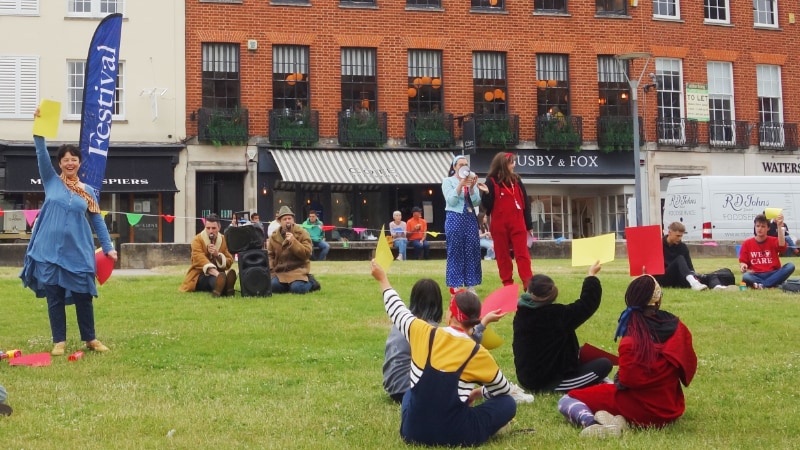